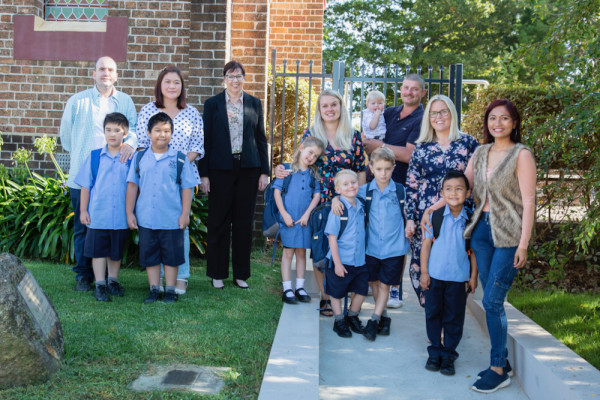 Our school motto – originally “All to All” – comes from St Paul’s letter to the Corinthians (1 Cor 9:22). The school’s current emphasis of prayer, teaching and gratitude for God’s blessings continues to build on the foundations and charism of the Sisters. After a period of discernment, the school motto was adjusted in 2017 to the present motto of “All to all in faith and learning”. Read about our vision and mission.

St Paul’s is a welcoming and inclusive community. While we have strong ties to the wider community and a rich history, we welcome many new families from many backgrounds and cultures to our school. We are proud of our diversity. We also enjoy a close relationship with our parish, participating in parish liturgies and events.

St Paul’s was established on the present Garrett Street site by Parish Priest, Monsignor Lynch, in December 1947. Students commenced classes in the January of 1948. Our school story, however, has much longer history.

The school has a long pastoral association with the both Josephite and Dominican traditions. The Sisters of St Joseph established a school in Moss Vale educating children at Kalingan House from 1884. In 1891, the Josephite sisters moved to Mittagong to establish a school there. Meanwhile, the Dominican Sisters took over the operation of the primary school in Moss Vale. The Dominican Sisters continued to lead and staff the school until 1989. Since then the school has been led and staffed primarily by laity.

A Catholic School in the Diocese of Wollongong

Catholic schools have a long and proud history in the Australian educational landscape. Originally established by orders of brothers, nuns and priests in the nineteenth century, they are now almost entirely staffed and led by lay people.

Catholic systemic schools in the Diocese of Wollongong are either parish primary schools like St Paul's, or diocesan secondary or K-12 schools. They are all co-educational schools. (The diocese also has another seven independent congregational secondary schools, some of which offer single-sex education.)

Catholic schools have a unique character because as well as being places where learning is highly valued, they are places where priority is given to a values-based education in the Catholic faith. This involves all staff and students proclaiming the Good News of Jesus Christ to the world. Staff identify strongly with their school and take pride in their work and the school’s achievements.

Take a Virtual Tour of Our School